FINALLY, THE TIME HAS COME FOR THE UWUKS TO ENTER THE MARKET! Niederlangen. What sounds like the title of a new fantasy film describes a fully automatic and completely autonomous system developed by the unoTech GmbH engineers to completely collect and record the physical data of a pressed bale and to be printed on a label to fastened to the bale in lasting fashion.

The name of this entirely new system from the unoTech company, which is known for the ruggedness and reliability of its products, is UWUK derived from the terms of unoTech “Wiegen“ (german for weigh) “und“ (and) “Kennzeichnen” (german for identification).
unoTech’s new development meets a requirement of the industry which has demanded such systems for a long time to ensure the traceability and identification of the quality properties of pressed bales in the simplest fashion.
However, partial solutions with continuous material handling systems have been known from former applications, but they show drawbacks in practical operation, in particular with respect to wear resistance, cleaning expenditures and reliability.
Here, unoTech’s UWUK system is based on an entirely new design approach, using solution approaches from press engineering and applications from an entirely different technical environments to provide a simple overall system which meets all requirements.

And the UWUK can do much more: In addition to collecting the physical data of a pressed bale such as weight, length and bale density, the new system can directly be adjusted and control the productivity of the upstream baling press - as a by-product, so to speak.

The UPAMAT baling press and the UWUK measuring equipment communicate within a closed control loop. UWUK evaluates all materials falling into the baling press „on the completed bale“. Thus, all processing parameters of the baling press are internally matched, readjusted if necessary and automatically stored for the subsequent material fractions in the system.

The advantages of the UWUK are obvious for the plant operating company: The bale identification at the exit of the baling press or at a separate weighing station is a thing of the past. Also, expertise for the parameterisation of a baling press working in a network is no longer required. In addition, execution programs for the control system, e.g. of the bunker systems, can be designed much more efficiently in interaction with a sorting system. Stock levels of pressed bales of a different composition can be managed more efficiently because of the unique identification of weight and bale volume, e.g. with respect to a further management of transport capacities or general criteria.

Using the UWUK system, the unoTech GmbH is on its way into the digital future of pressing operation. Highly efficient, fully automatic and fully integrated, the UWUK makes sure that plant operating companies are well prepared for the future of their business. 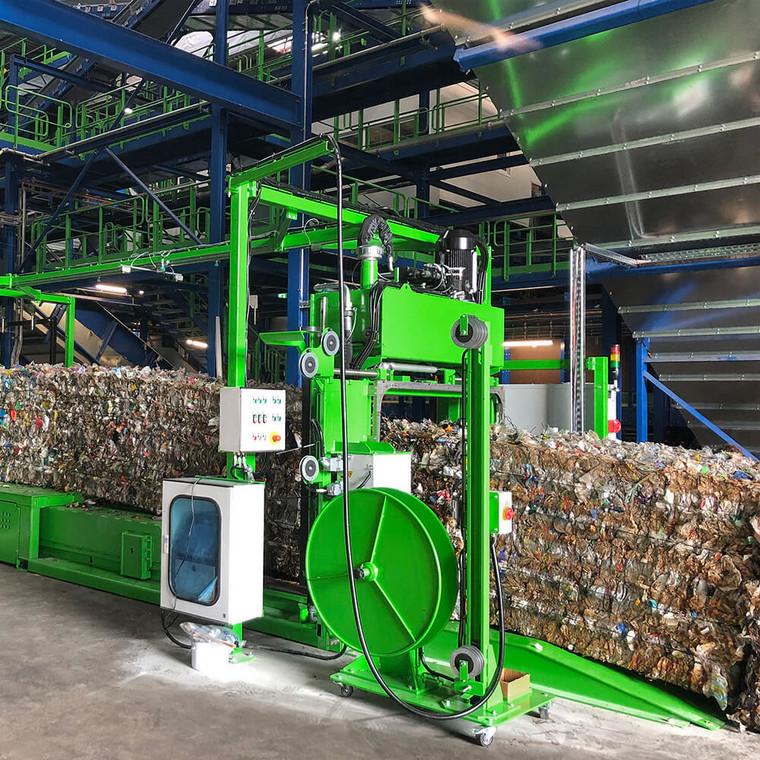 unoTech UWUK - Fully automatic and completely autonomous system to completely collect and record the physical data of a pressed bale and to be printed on a label to fastened to the bale in lasting fashion.